Gallstones are hardened deposits of bile fluid that form in the gallbladder causing an obstruction. The gallbladder is a small, pear-shaped organ on the right side of your abdomen, just below your liver.

The gallbladder has a digestive fluid called bile that is released into the small intestine.

Gallstones can vary in size from the size of a grain of sand to as large as a golf ball.

Some people develop only one gallstone, while others develop many gallstones at once. 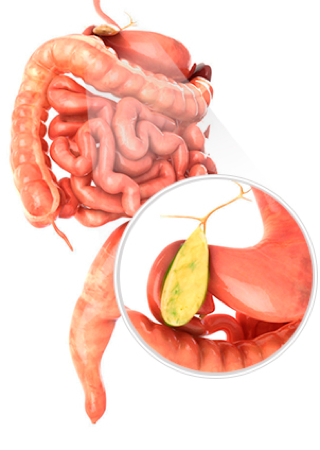 In general, gallstones symptoms include pain in the upper abdomen on the right side and towards the back. Almost always after eating foods that are high in fat or that contain dairy or eggs.

Gallstones symptoms can also include nausea, vomiting, general malaise and even fever in the more advanced stages of the disease. If a gallstone causes a blockage of the bile ducts, there may be a yellow coloration (jaundice) of the eyes and skin, and gallstones can lead up to Pancreatitis.

Women are typically more prone to gallstones, although they can occur in men as well. Diet is an important factor, as people who are overweight or obese are more likely to develop gallstones.

Complications of gallstones can be inflammation of the gallbladder (Cholecystitis) and/or obstruction of the common or pancreatic bile duct (Coledocolitiasis, Pancreatitis).

In addition to an adequate physical examination, an ultrasound may be ordered to look at the liver and bile ducts.

The most appropriate treatment is a Cholecystectomy (the surgical removal of the gallbladder). A cholecystectomy is typically performed through a minimally-invasive, laparoscopic surgery.